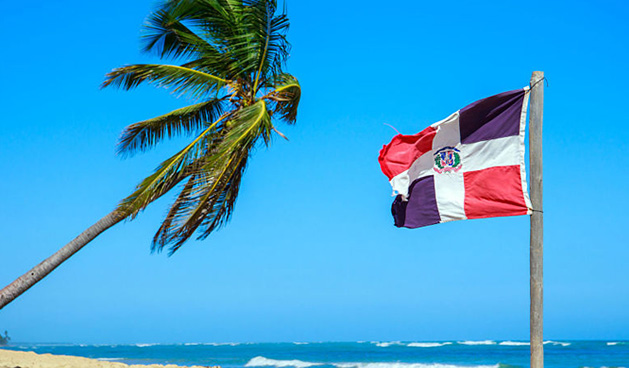 Dominican Republic, a growing and secure country for investment

The Dominican Republic is a Caribbean country located just 650 miles (1,046 km) south of Miami. Surrounded by the Atlantic Ocean to its north and the Caribbean Sea on its south, the lush tropical island paradise boasts nearly 1,000 miles (1,609 km) of coastline including sandy-white beaches, amazing beauty and sophisticated tourism offerings that attract international visitors, sports champions and celebrities alike. The DR is the second largest country in the Caribbean, comprising an area of approximately 30,000 m2 (48,198 km2).

The Dominican Republic has a population of more than 11 million people, according to the International Monetary Found the Dominican GPD is the world’s number 67 with a value of USD81, 103 million.

Tourism, one of the pillars of the Dominican economy, also kept its ever-increasing trend in 2017 with a record arrival of 6.2M visitors (6.8% increase), keeping up with the government objective of 10M visitors by 2020 and generating estimated revenues of US$7.2b. Fresh foreign investment in tourism infrastructure keeps landing into the country and, at the moment, there are many resorts and hotels being developed or scheduled to be this year. The latest investments in tourism infrastructure have been focused both on luxury hotels and resorts, as well as high-end residential projects, which are expected to increase the average spending per tourists.

With close to 2 million Dominicans living abroad, remittances represent a key source of revenues for the country and a driver of economic growth. Rising by 13% in 2017 over 2016; it reached US$5.9bn, an equivalent to 7.8% of GDP.

The mining activity, which had grown 26.5% in 2016 propelled by the re-start of ferronickel exploitation (which had been halted since 2013), slowed down and decreased 3.4% in 2017. Gold exports from Barrick Gold’s Pueblo Viejo operations reached US$708M for the same year, making the company once again one of the key contributors to the public coffers.

The DR’s Consolidated Public Debt keeps its steady growth and at the end of 2017, reached US$37.2bn, equivalent to 48.9% of GDP. Sovereign bonds have become a regular source of financing, both internationally and domestically. In 2017 the DR issued and sold US$1.7bn worth of bonds in two blocks of US$1.2bn and US$500M, respectively. Furthermore, in February 2018, the Dominican Government issued its first international bonds in Dominican Pesos (DOP) for a total of DOP$40,000M (approx. US$822M) and also US$1.0bn in sovereign bonds of 10 years at an interest rate of 6.5%, for which demand was more than twice what the DR Government had issued. Dominican bonds continue to have good demand in the international markets and have become the tool of preference of the DR Government for external indebtedness. At the end of 2012 the cumulative total of sovereign bonds issued by the Government was US$2.8bn; by the end of 2018 this total will be US$13.1bn.

The DR Government has been adding regulations and fine-tuning its fiscal system in order to close down on tax evasion, which is widespread in the country. There is consensus among public and private sectors that a sound, integrated fiscal reform is due in the DR. However each side has a different point of view about which items should the reform be focusing on. While the Government considers that many exemptions should be eliminated and taxes revised, the private sector supports lower taxes and an improvement in Government expenses quality, with stricter regulations. The DR Tax Code is plagued with legal dispositions that generate 140 fiscal incentives or exonerations, creating a system of “special regimes” which, in the words of the Minister of Finance, have become the rule instead of the exception.

The 2018 National Budget includes 10.5% higher spending than the 2017 Budget, and also US$2.9bn in financing, which will further increase the Consolidated Public Debt. Eighty five percent (85%) of the Government expenses will be current expenses, leaving only 15% for capital expenses. The Government will be spending two and half times more money on interest payments than in capital projects this year. 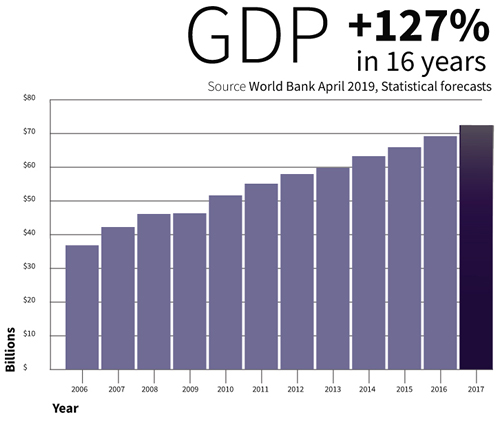 The economy has enjoyed a veritable boom over the last thirteen years, with an increase of +185% in its GDP between 2004 and 2017.

The stats from the Dominican Central Bank up until 2016 show USA and Canada as the largest all-time foreign investors in the country (USA being 1st), investments are mostly concentrated in mining, financial services, manufacturing, tourism, renewable energy and agriculture.